When it comes to running, foot placement is one of the key factors – after all, your foot is your sole point of contact with the ground, with the arch working as a shock absorber and your foot then transferring force generated through to the ground, propelling you forward.

In general there are three foot strike patterns – Forefoot, Midfoot and Rearfoot.

Evidence shows that no one foot strike pattern is more superior to another.  Forefoot strike is most seen in sprinting, in part due to the shoe type, particularly when using track spikes.  Rearfoot strike is the most common pattern however, with 75% of runners impacting the ground first with their heel, especially as running distances increase.

A common term heard when looking at foot placement during running is pronation.  Pronation is the term used for the inward roll that occurs in the foot at the point of contact on the ground. This is a natural movement and allows you to absorb the shock. Whilst pronation is a natural and important biomechanical function, too much can lead to lead to injuries, particularly around the knee.

As a result of overstriding, additional stress can be put on other joints such as excessive knee extension, along with a lack of hip flexion and sometimes dorsiflexed ankle.  When the stride length becomes too long, the leg is landing too far out in front of you, often heel first with a rearfoot strike, which acts as a break, slowing your running down.

Overstriding commonly occurs when a runner has a slower cadence, resulting in a greater length of time where the foot is in contact with the ground.  There is a range of different cues that can be used to aid the re-education of stride pattern.

Evidence shows that no one foot strike pattern is more superior to another.

Interested in finding about more about how you run? Why not book a run analysis?

75% of runners impact the ground first with their heel 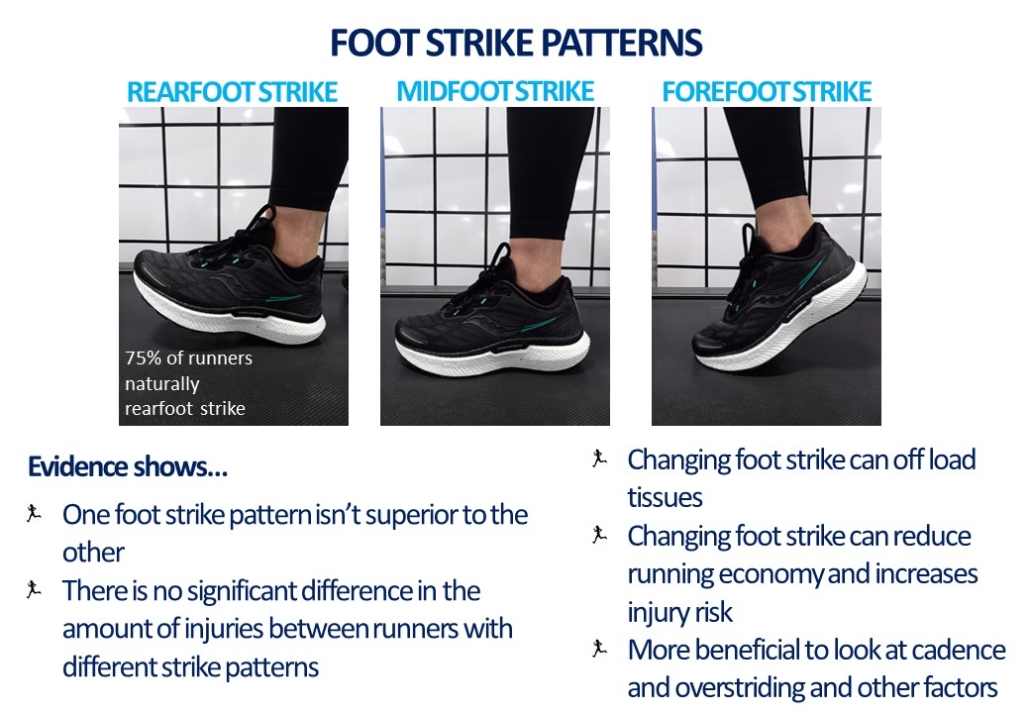 Are you working hard enough when it comes to your rehab and strengthening exercises?
Rate of Perceived Exertion (RPE) is a great tool for monitoring how hard you are working.
🤔Not sure, or need some gentle encouragement to work that bit harder? Our Strength Conditioning therapists Dan and Izzie can help!
👉Book your FREE discovery session by calling 01454 540066

Have you tried our Pilates classes? We have space this Thursday at 6:15pm
💜 Small groups
💜 Easy to book online
💜 Great for those recovering or injury or looking for injury prevention
💜 Get 2 classes FREE with our 10 session Class Pass

This website uses cookies to improve your experience while you navigate through the website. Out of these, the cookies that are categorized as necessary are stored on your browser as they are essential for the working of basic functionalities of the website. We also use third-party cookies that help us analyze and understand how you use this website. These cookies will be stored in your browser only with your consent. You also have the option to opt-out of these cookies. But opting out of some of these cookies may affect your browsing experience.
Necessary Always Enabled
Necessary cookies are absolutely essential for the website to function properly. These cookies ensure basic functionalities and security features of the website, anonymously.
Functional
Functional cookies help to perform certain functionalities like sharing the content of the website on social media platforms, collect feedbacks, and other third-party features.
Performance
Performance cookies are used to understand and analyze the key performance indexes of the website which helps in delivering a better user experience for the visitors.
Analytics
Analytical cookies are used to understand how visitors interact with the website. These cookies help provide information on metrics the number of visitors, bounce rate, traffic source, etc.
Advertisement
Advertisement cookies are used to provide visitors with relevant ads and marketing campaigns. These cookies track visitors across websites and collect information to provide customized ads.
Others
Other uncategorized cookies are those that are being analyzed and have not been classified into a category as yet.
SAVE & ACCEPT